Hoppa till innehållet
Home About the Dalén Museum

About the Dalén Museum

In the little town of Stenstorp in Västergötland, Sweden, lies the Dalén Museum.
Gustaf Dalén was one of Sweden’s Nobel prize winners, and his inventions dating from the beginning of the 1900s have been hugely important to the well being of people all around the world. Dalén saw to it that lighthouse lights began to flash, and as a result shipping became much safer than before. 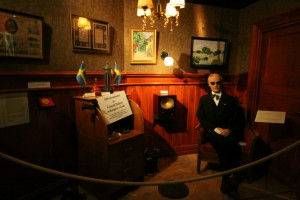 Picture from our exhibitions.

Gustaf Dalén was born in Stenstorp on 30 November 1869. The revolving light apparatus, the sun valve and the automatic mantle changer are only a few of the things that made this inventor and Nobel prize winner famous all over the world. His revolutionary inventions in the field of lighthouse technology have saved the lives of hundreds of thousands of sea farers over the years.
In 1912 his inventions became world famous when they were installed through out the Panama Canal. 35 lighthouses and several more buoys  guided the ships through the canal when it was opened 1914. All of them with Gustaf Daléns pioneering inventions.

The Dalén Museum, housed in Stenstorps lovely Court House from 1884, was opened 127 years after his birth. It’s an interactive experience museum which tells the story of Gustaf Dalen’s life and the amazing stories of his inventions. 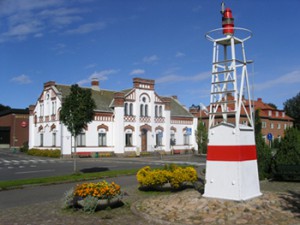 The Dalén museum and our authentic and fully operational lighthouse.

The entry price includes a showing of a short documentary film which is in Swedish or English. Just tell the staff if you want to see the English version.

The museum also exhibits objects that followed in the footsteps of Gustaf Daléns prolific inventiveness, such as the AGA car and the AGA cooker, film projectors, radio and TV apparatus, incubators, measuring instruments and the heart lung machine. You’ll get a really good overview of AGA’s more than 100 year old history here. 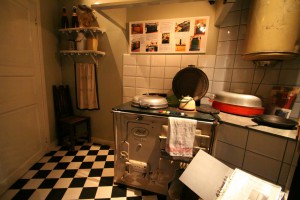 Original AGA cooker from our exhibitions.

In 1904 Gustaf Dalén started work at AGA, a company that had recently been established. He succeeded in revolutionising lighthouse illumination with a series of technological innovations, and made it possible to use acetylene gas in a safe, economical and effective way. The foundations for AGA’s success were created and in 1909 Gustaf Dalén became the managing director of the company.

In 1912 during an experiment to test how much pressure a heated gas cylinder could tolerate something went wrong, and when, after waiting a few moments, Gustaf Dalén went over to examine the problem, the cylinder exploded. Gustaf was severely injured and for a long time hovered between life and death. He survived, but his sight could not be saved. Despite becoming blind he carried on as before, as an inventor, the managing director of AGA and head of a family.

Gustaf Dalén was a great optimist who took numerous misfortunes in his stride. He didn’t just lose his sight but suffered financial losses as well. During the early 1920s he and the AGA company experienced severe economic difficulties and Dalén lost his fortune. But he managed to get back on his feet. In the 1930s AGA suffered another financial crisis, after the Kreuger crash when many Swedes became gripped with panic.
Dalén went and ordered a number of pins with the text “VAR OPTIMIST” – BE AN OPTIMIST. As soon as he met someone who was complaining he took out a pin and fastened it to that person’s lapel. He himself also wore a pin in full view of everyone. Exact copies of the original, the so called Optimist Pin, are available to buy in the museum.

You can travel to the Dalén Museum by train direct from Gothenburg, Skövde, Nässjö, Jönköping and towns in between. In Stenstorp you can dine at the local restaurant and those wanting to stay over can do so in the reasonably priced hotel next door, Hotel Fyrvaktaren.